The last outing of the Concert Club before Lockdown was to see the musical “Cabaret” at the Grand in Leeds. Everyone I spoke to said that it was a terrific production and I felt at the time that it reflected the tenor of Christopher Isherwood’s books about 1930’s Berlin (written contemporaneously) “Mr Norris Changes Trains” and “Goodbye to Berlin. Was I wrong? The books are written in the first person with the author using his own name as narrator. Although the books are works of fiction neither constituting an autobiography nor a non-fiction history the observations and descriptions of the characters and events in the books are such that the reader must believe that such characters and events are base on true experiences. The narrator writes at the start of “Goodbye to Berlin”  - “I am a camera with its shutter open, quite passive, recording not thinking”  The books are to me essentially extremely sad reflecting the dire and harrowing lives of poverty of the recurring characters amongst whom  he lives, contrasting with the great wealth enjoyed by others particularly those he teaches English. The then current state of affairs in Berlin is acceptable to neither the Communists with whom he has sympathy, nor the Nazis with whom he has not. There is a foreboding acceptance of worse to come which it is impossible to alter. One feature common throughout is the casual anti-Semitism on all sides which demonstrates itself in throw away remarks, and in unrestrained Nazi violence in the streets which is ignored if not actually undertaken by the police themselves.

This could not however alone form the basis of an exciting and entertaining musical entertainment and the writers and producers of the musical had to keep in mind the need to create colour and dramatic effect.  Although the names of certain characters from the books were used the story is essentially new. “Sally Bowles”, which is the starring role in the musical, is in the books just one character with an unsatisfactory life.  She seeks and fails to find a wealthy man to fund her lifestyle on a permanent basis and is regularly let down remarking “I feel I am no damn use at anything” and later with Christopher “Not much good as gold diggers are, we?” The KitKat Club, such an important component of the musical, is an invention taken from other sources describing life in the Weimar Republic.  However, using certain characters and themes from the books they created a smash hit musical. Cabaret” captured aspects of Berlin Weimar life and, at the very end of the show, reflected the bitter sweet character of Christopher Isherwood’s books. 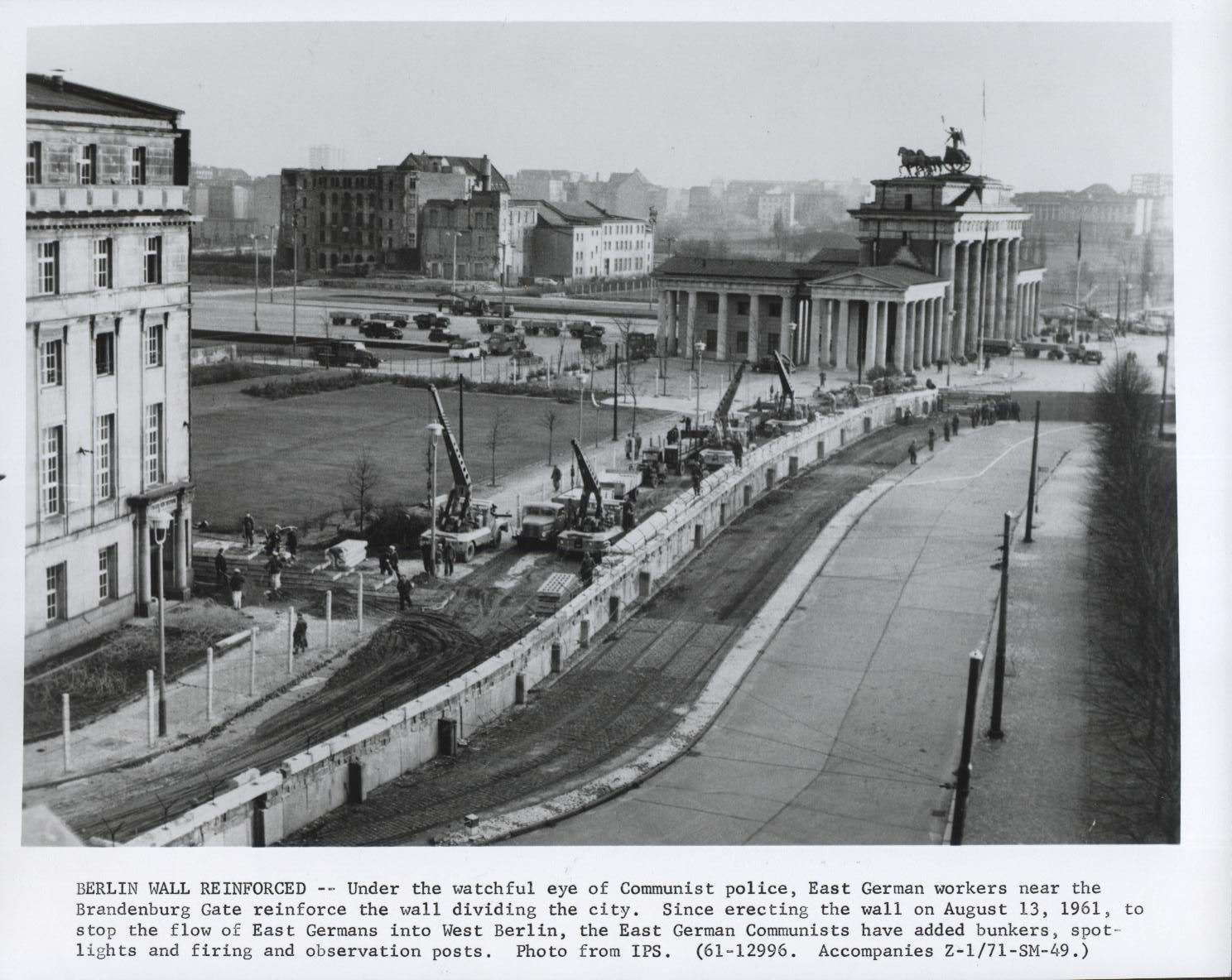 It is now some 30 years since the reunification of Germany and Berlin has resumed its place as the capital City and not only succeeded in resuming its historic (rightful?) position as the predominant German city  but has also become a city of choice for weekend breaks.

It seems now an obvious choice and to those outside Germany appeared to be so at the time For Centuries it was a capital initially of Brandenburg since the fifteenth Century then Prussia and ultimately the united German Empire after 1871. (Compare London)

However in West Germany at that time it was not such a simple obvious choice and there was considerable debate as to whether the capital should move from Bonn where it had been established for some 40 plus years.

With its position as the site of the West Berlin Parliament, numerous Government Offices were based in Bonn with squadrons of  civil servants making it their home. These would all have to move, just imagine their position contemplating moving with children who might well be settled in good schools  or having to leave grandchildren or grandparents and resettle some 600 km East  almost at the border of Poland.  For the West Germans the post war period had been the longest period of a settled reliable peaceful life since the 19th Century.  This raised the questions where were they to live and  what was the condition of East Berlin in 1990?  West Germany was by then a rich country and West Germans had become accustomed to the best of everything. They had got used to everything being new, clean and modern and working efficiently. They found out fairly quickly that none of these things applied in East Berlin. They also found that the families of East Berlin had been housed in dwellings considered appropriate by the communist authorities and included many “Platen Bauten” i.e. high rise blocks of small flats. Each flat being little larger than a small hotel suite. Such accommodation was just not good enough and the services in the properties were old and prone to breaking down. West Berlin was modern but very small with limited housing.

Bonn  being located on the Rhine has  pleasant surroundings and a temperate climate. It provides easy access to the Black Forest and the Alps for long weekend skiing trips and for trips to Switzerland or France. Not only would all this have to go but the families would have to accustom themselves to the very cold  central European winters.

There was also the question of the expense of moving the capital. New offices would have to be built at enormous expense Many Germans objected to the expense which they saw as unnecessary. . There would be inevitable disruption of the Government and its incorporation of administration of the reunified state.

There were a couple of arguments which might seem strange outside Germany. The first was the fact that Berlin had been the capital of Prussia. Now Bavarians have a historical distrust not to say antagonism to the idea of Prussia. In 1871 at the first Treaty of Versailles following the successful (for the Germans ) Franco Prussian War Bismarck engineered the public offering of the role of Emperor of the united Germany to Kaiser Wilhelm King of Prussia. This relegated  the state of Bavaria to second rate status in the new Germany and of course the capital of Prussia became capital of Germany ,  a slight to Munich. Bavaria has always been and still is a very large and  wealthy state. It is  now a Länder but with its historic state borders intact. Prussia had a deserved reputation as being a military state and the Prussian Kaiser was held responsible for the disastrous First World War which destroyed ,impoverished and starved Germany.

We come back to the question of cost. Bavaria had long  complained with some justification that it was paying the bills for the whole of West Germany. Whilst Germany may have considered that  the West Germans could absorb the cost of taking over the East with the change in their back pocket, It soon became clear that this was not the case and Bavaria felt that it would be paying the bills for this as well.  Moving the capital just added to the costs.

Another prominent  and somewhat unexpected element in the debate was  the question of whether Berlin could make an acceptable capital for the a modern state with high standards of morality and which commanded respect from the world. The last experience many Germans had with Berlin was  in the 1930’s when its reputation  was as a city without moral compass where any activities (in 1990 regarded in  West Germany as perversions) were  allowed and where personal pleasure was a goal. Berlin did not have the gravitas which many  middle and professional classes considered essential. Much has been written about  the  life during the Weimar Republic. Little of it complementary. The smash hit musical “Cabaret” set the seal on the international reputation of the city.

Berlin also reminded the West Germans of some things they had forgotten or did not wish to resurrect  namely the rise of the Nazi Party with its violence and dreadful activities and consequently of  Hitler who was the last ruler of Germany and who ruled from Berlin. A very conspicuous  visible reminder of this  was the  parliament building itself, The Reichstag, which had been deliberately left by the Communists  since 1933 in its ruinous state  after the infamous fire.

However it was somewhat inevitable that with all that Berlin  and particularly East Berlin had gone through and remembering the visit by President Kennedy that the capital would revert  to its historic  position. It would be seen as an insult to poor East Germany if it were to be governed from a city in the rich West. There were indeed already enough perceived insults. I have already mentioned the distrust of the Eastern Block politicians  by the West and the closure of out of date East German factories with consequent massive unemployment. All blamed on the West.  Ossies versus Wessies feelings grew.

In the end Berlin enjoyed massive investment and rebuilding and has become a must visit city. It has also for better or worse resumed some of its avant garde reputation.