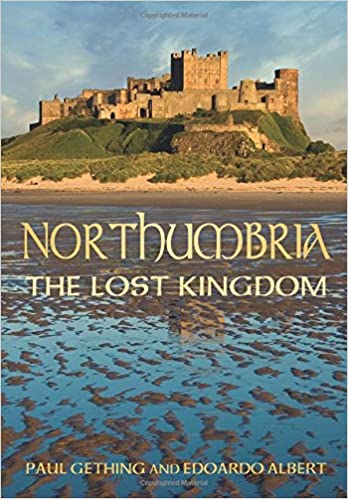 NORTHUMBRIA.  THE LOST KINGDOM. by Paul Gething and Edoardo Albert.

If you think of yourself as an Anglo-Scandinavian or are just interested in the history of the land called Northumbria which lay between the Humber and up in to the borderlands of Scotland, then this is the book for you.   This is faction, written by archaeologist Paul Gething and professional writer Edoardo Albert.  In the early medieval period for two hundred years, Northumbria was one of the great kingdoms of Britain. It was the key centre of scholarship and culture in the country, yet it has been all but forgotten.

When the Romans left Britain in 410 AD obscure kingdoms briefly rose to power.  Northumbria was different.  Initially in Bernicia, the coastal area, its kings fortified the rock at Bamburgh.   Deira (based on the Wharfe and Aire valleys) was centred on York.

In the early 7th century the royal families of Deira and Bernicia united to become kings of Northumbria  -  the pre-eminent kingdom in Britain.  Edwin, who had also conquered the British in Elmet, became the first Christian King of Northumbria.  Oswald, after years in exile on Iona returned as King and founded monasteries such as that on Lindisfarne near to his impregnable fortress Bamburgh Castle.   Learned scholars produced beautiful manuscripts and brought Christianity to the rest of the country.    Excavations at Bamburgh have revealed a society of unsuspected sophistication, capable of creating swords and jewellery unparalleled before and since.  The Kings of Northumbria ruled a vast area and held sway as High Kings of Britain.    Its inhabitants made a civilisation that stood shoulder to shoulder with Byzantium and the new power of the Carolingian Empire under Charlemagne.

So what went wrong?  How did the power slip away?  There are many factors that contributed to Northumbria’s decline.  The final chapter of the book investigates them.

Read to find out.

THE BOAT GIRLS by Margaret Mayhew

OLD SOLDIERS NEVER DIE by Margaret Mayhew I recently reviewed this book which is the first in a series. However I noticed she has written several Standalone Novels. I have read three of them and so far they have been of the second world war from different perspectives. I have enjoyed all of them, they tell you about lots of experiences people have had, and some of them upsetting, but that is to be expected. The first book I read was “The Boat Girls”.  Three girls decide they would volunteer to a government scheme to help the war work.  Working on canal boats. They didn’t know each other and all came from completely different backgrounds. First was the training two months.  It was hard work, they had bruises everywhere but they stuck it out.  When finally finishing the training they got their own boat, and the fun began.  You can get some of the books with the app. North Yorkshire Libraries both on ebooks or ordering the books to be delivered to the library. Otherwise Amazon on kindle.

A review by Chris Alder

This really is something completely different. Westwind was initially published, after some delay and much modification, in 1990. This was when Ian Rankin was finding his literary feet and had not yet settled on a particular genre. He was working at a day job whilst trying to become a full-time writer and experimenting with what kind of writer he was to become. The first John Rebus book, Knots and Crosses, had already been published several years previously. Westwind did not become a particular success on initial publication. By 2019, he had been persuaded by a fan to take another look at republication, so buffed it up a little, and this is the result. I know all this because of the Author’s sixpage introduction, itself of interest if Ian Rankin is an author you read.

To me, this seemed very much like the new writer’s early effort that it was. Knots and Crosses reads like the work of a mature author compared with this. There are some rather stretched metaphors and the text does not always flow fluidly. Some characters seem to pop up out of nowhere and then just as easily fade away. Some of the character naming distracted me as it seemed rather stereotyped. Thus, a greasy spoon is Alfie’s Café, a security man is ‘Bert’, and a senior security services man is ‘Farquharson’. Nevertheless, it is not a bad book if looked at as a fairly light and quick read, albeit with a rather convoluted story line with some dodgy character psychology. If you read it from the perspective of seeing how a very good author started out as much as for its intrinsic qualities as an entertaining novel, it becomes more interesting. It does ok as a lockdown read.